Our Sanctioned Event of the Year 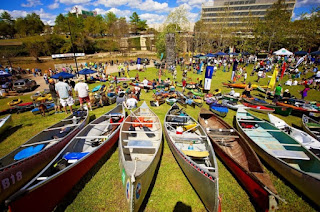 ACA is happy and proud to announce that the Sanctioned Event of the Year, nominated by the paddling public, is the Buffalo Bayou Partnership!

Established in 1986, Buffalo Bayou Partnership (BBP) is the non-profit organization transforming and revitalizing Buffalo Bayou, Houston’s most significant natural resource.  BBP’s geographic focus is the 10-square mile stretch of Buffalo Bayou from Shepherd Drive to the Port of Houston Turning Basin.  Thanks to the generous support of foundations, corporations, individuals and government agencies, BBP has raised and leveraged more than $150 million for the redevelopment and stewardship of the waterfront.

Buffalo Bayou officially starts just west of Katy, Texas and flows approximately 53 miles east through the Port of Houston and Houston Ship Channel into Galveston Bay and onto the Gulf of Mexico. Ever since the Allen Brothers founded Houston in 1836, Buffalo Bayou has played a critical role in the evolution of the city. But in more recent years, Buffalo Bayou had been a neglected river.  Additionally, Houstonians built a perception of the city’s bayous as drainage ditches since a number of the city’s sewage-treatment plants discharged directly into Buffalo Bayou. The water smelled and was not deemed safe for recreational boating or swimming. But in an act that was part joke and part celebration of the bayou, Wayne Walls, a local canoer, and his friends from the Houston Canoe Club created “The Reeking Regatta: The World’s Smelliest Canoe Race” in 1972 with posters and a logo that depicted a paddler wearing a gas mask. Expecting only a handful of people to participate, the first-ever race in 1971 gathered 120 brave paddlers and then grew to 500 paddlers within 5 years – the largest race “west of the Mississippi.” More environmental-awareness and social gathering than official boat race, participants navigated trash and debris in the water and were greeted with beer steins at the finish line at Allen’s Landing.

In the late 1990s, Buffalo Bayou Partnership took charge of planning and executing the annual boat race and renamed it to the Buffalo Bayou Partnership Regatta. Now 700-900 participants – skilled and novice paddlers ages 12 and up – in approximately 600 kayaks and canoes, race down a 15-mile stretch of Buffalo Bayou. It is Texas’ large canoe and kayak race and is one of the top 5 largest in the nation. The event attracts hundreds of spectators to the bayou’s banks along the recently renovated Buffalo Bayou Park and to the finish line in downtown’s Sesquicentennial Park to see this colorful and uniquely Houstonian spectacle on a pleasant weekend in March.

If you would like more information about ACA Awards, please follow this link: www.americancanoe.org/Awards
Posted by ACA | Canoe - Kayak - SUP - Raft - Rescue at 7:22 AM