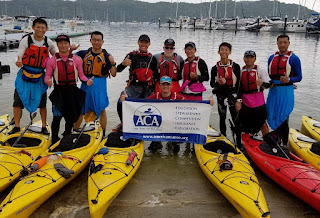 From Level 1: Intro to SUP to Level 3: Coastal Kayaking to Level 4: Whitewater Kayaking to Adaptive Paddling Workshops, there are now multiple ACA certified Instructors across China.  In addition, over 100 ACA assessments have been awarded over the past few years. (insert SUP photo with ACA banner here)

On May 19, 2017, the ACA entered into a partnership with Zhejiang University. (use their logo and the photos where we are on stage signing the agreement)

After a series of meetings, a signing ceremony took place at the International Paddlesports Summit in Hangzhou in conjunction with the 120th anniversary of the University.

Excerpt from the Strategic Partnership Agreement
In order to further the spread and promotion of paddlesports, and to advance the exchange and development of paddlesports between China and the USA, both parties held mutual and friendly consultation. By utilizing Zhejiang University’s hundred-year old educational influence, and American Canoe Association’s expertise in paddlesports, on the basis of the principles of “resource sharing”, “complementary advantages”, “emphasis on practical results”, “win-win cooperation”, both Parties have agreed to establish a stable and sustainable long-term partnership, and reached the following strategic partnership mutual understandings:

• Establish strategic partnership with the aim to keep it for the long term.
• Launch educational and instructional cooperation, ACA will assist Zhejiang University in establishing paddlesports curricula, the ACA will give its authorization to Zhejiang University to carry out ACA's existing paddlesports educational and instructional programs and establish an ACA accredited education and instruction headquarters on the Universities premises.
• Both Parties will provide each other with favorable conditions and treatment, forge a new developmental advantage, and work together to promote paddlesports in China’s schools.

We would like to thank ACA Instructor and teacher at Zhejiang University, Ge Wu for his continued assistance throughout this process. In addition, we have also been working with former Chinese National Team member and Sprint World Champion Ms. Shu Yaping from the University on this outreach project.

This is a unique opportunity to not only share our respective ideas on paddlesports, but also to enhance the cultural experience between our two countries.

If your College or University is interested in a paddlesports exchange program, please contact ACA Chief Operating Officer Christopher Stec for additional details. 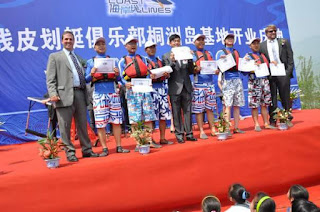 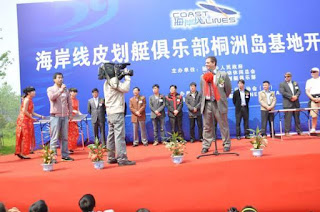 The ACA is also commited to supporting the numerous paddling clubs that are arising throughout China.

From offering Instructor Certification Workshops and Assessment Courses for clubs to special benefits to be found on the ACA's soon to be launched Chinese website, we realize the important role that paddling clubs are playing in growing various aspects of paddlesports throughout China. We would like to thank the team at Zhouji Kayak Club as well as all the other paddling clubs that have already invested time and energy in enhancing the quality of their programs by parricipating in ACA instructional programs.

Over the next few months the ACA will be setting up a Chinese website and payment platforms on AliPay and WeChat.

We will continue to increase the translation (our Instructor Manual is currently in Mandarin) of relevant ACA documents and course criteria.

In addition we are considering potential staffing options based in China.

The ACA would also like to thank Dave Burden and Ivan Bartha for the significant amount of time, energy, and guidance that they have provided in regards to the ACA's growth in China. 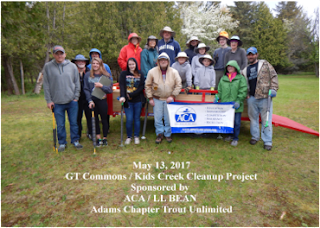 In 2012, a dam failed while being dismantled and there was a huge flood on the Boardman River.  After that the Boardman River Clean Sweep had to remove 90 docks, decks and other large debris that had been washed into the river.  The most difficult part of that project was finding the pieces that we had photographed and marked with a GPS.  We needed a combined GPS/camera.

This year we decided to clean up Kids Creek, the last and largest tributary of the Boardman River, which flows through a 100 year old historic stand of Norway Spruce at the restored Traverse City State Psychiatric Hospital that was established in 1881 and closed in 1989.

We found Kids Creek to be littered with the usual trash and a homeless campsite but when we inspected the surrounding woods, we found a horrible mess. Many homeless people of Traverse City live in these woods and their small amounts of trash and litter have built up over the years to an amazing level.  As far as we know, neither these woods nor the creek have been cleaned up in recent memory.

The woods are a maze of foot paths and trails and I was lost as soon as I walked into them.  We photographed and GPS marked the trash along the creek and in the woods but we had a hard time finding it again when we went back.  It was very confusing.

We used the ACA grant money to buy a waterproof GPS NIKON camera and, with the assistance of a member of the homeless community as our guide, we rephotographed the locations we had previously found and our guide led us to several more sites that we had missed in the woods and on the creek.

Finding them again was much easier with the photos and GPS coordinates that matched up so easily.  All we need to do now is click on the coordinates under the photos in our report gallery and a map comes up to where the photo was taken and we can see what is there in the photo.

We wanted to do our project before the foliage came out on the trees and bushes so we would not have to struggle to move around in the woods and for clear visual sight lines to keep an eye on everyone for safety, especially any children that volunteered.

On the Saturday of the Mother’s Day weekend, May 13, 2017, seventeen people arrived at our meeting place (in the rain) and we started to work.  4 of the volunteers were young children who worked right along side of us.  They were able to get into spaces that we larger people could not enter.  We all wore protective gloves and the children were not allowed to touch any of the trash except with a grabber.   Seven different organizations were represented.

With the assistance of our homeless volunteer and in only 2 1/2 hours we removed 95 - 42 gallon bags of trash plus a lot of large items like a trash tote, wheel barrow, tents, sleeping bags, tarps  and some boxes.  As we filled the bags, we left them at strategic locations in the woods for later removal and we all moved on to the next site.  Each bag weighed at least 45 pounds.  That's about 4000 pounds in total.
On our last trip out of the woods, we spotted three more sites which some of us went back a few times to complete.  In all we removed a total of 124 bags of trash in three days.  That’s about 4500 pounds.

On our last project day, we distributed trash bags to several of the homeless people camping in the woods and along the creek.  We placed a trash tote at the park across the street from the woods for the campers to use and we left some signs for hikers and bikers to encourage them to take out what they bring in.

We plan to continue the momentum that the ACA helped us start and make this an annual Mother's Day weekend event to maintain this beautiful and pristine property through which runs the largest tributary of the Boardman River.

We wish to thank the American Canoe Association and LL Bean for their continuing support of our efforts to keep the Boardman River flowing clean, cold, and beautiful. 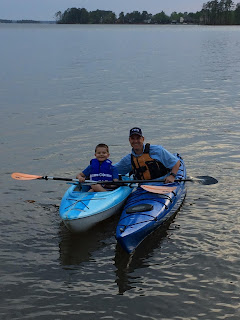 In his 17 years of kayaking all over the world, Dave Herpy, an ACA-certified kayaking instructor, has experienced numerous memorial encounters. This includes seeing alligators, bald eagles, and dolphins from his kayak. He has been instructing for 11 years. However, the greatest kayaking experience of his life took place just last month. During a family trip to Lake Murray in Chapin, South Carolina, in April 2017, Dave taught his six-year-old son, Jacob, how to paddle a kayak for the first time.

“It was a very heart-warming experience for me to be able to share my own passion for kayaking with our son, Jacob,” said Herpy. “It was especially touching to witness his strong connection to paddling, having his life jacket on every time we went outside asking if we could go kayaking again.  He was immediately hooked on kayaking, just as I have been since my first experience 17 years ago.”