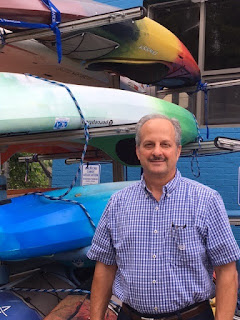 
FREDERICKSBURG, Virginia (Aug. 16, 2017) – J. Michael “Mike” Foreman, a well-known conservationist and natural resources leader in Virginia and throughout the Chesapeake Bay watershed, joined the American Canoe Association Aug. 1, 2017, as director of Conservation, Stewardship & Public Policy. In this role, he will lead all aspects of ACA’s grassroots efforts to promote appropriate access to clean water on America’s waterways, including the nation’s coastal areas. Foreman will provide leadership on federal, state and local policy considerations to advance the mission of ACA. He will also coordinate a wide range of water-based clean-ups throughout the country.

“We are so pleased to have Mike’s leadership and skill set as we continue to build our policy and community stewardship efforts,” said ACA Executive Director Wade Blackwood. “Mike will help engage our hard-working state director leaders and paddling clubs to increase ACA’s impact on policy and stewardship issues at all levels.”

Foreman brings 36 years of work experience including leadership, facilitation, strategic planning, group process and mediation services. He has worked in the university, corporate and public sectors since 1987, recently retiring from Virginia state government with 30 years of service.

Throughout his career, Foreman has worked in the natural resources field, from agricultural researcher at North Carolina State University and corporate forester work in Louisiana and Mississippi, to work as a forester, program manager and director in Virginia government. He was instrumental in bringing several major programs to Virginia government, including the Conservation Reserve Enhancement Program, the Forest Legacy Program, and the Riparian Forest Buffer Initiative effort. He has worked within the Chesapeake Bay Program leadership for Virginia since 1992, holding major positions and chairmanships during that time including major input on both the year 2000 and 2014 Chesapeake Bay watershed-wide agreements.

Honing his leadership skills, Foreman has conducted hundreds of group process events, facilitation, and leadership trainings throughout his career. As a part of the Virginia Natural Resources Leadership Institute faculty for the last 17 years, he teaches “leadership” portion of the curriculum.


He lives with his wife of 39 years, Deborrah, near Charlottesville, Virginia. They have three grown children and eight grandchildren.
Posted by ACA | Canoe - Kayak - SUP - Raft - Rescue at 11:30 AM