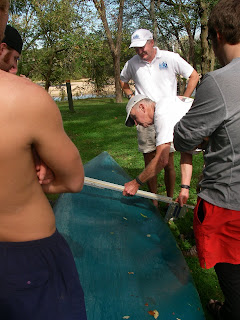 The 2009 Whitewater Open Canoe Downriver National race took place this past week in West Forks Maine on the Kennebec and the Lower Dead River. The Kennebec was running around 9300 cfs and the Lower Dead was running between 2000-5000 cfs. Competitors had to race through almost 6 miles of class 1-3+ whitewater for the down river race and about 1.5 miles of whitewater for the sprints. Wednesday July 1st was an official practice day. Racers from all over the country were present and eager to race.

The first day of competition was on July 2nd and took place on the Kennebec River. OC-2 Mixed and OC-2 (10-16/25-up) classes were racing.

All sprint classes raced on the 3rd. The sprints were held on the Lower Dead river. The two main rapids competitors raced through were Upper and Lower Popler. Some of the most popular classes were F16 OC-1 men and F16 OC-2 men. Charlie Bracket and I tied for the fastest F16 OC-1 men time. Jeff Owens and Chip Loring had the fastest F16 OC-2 time. Later that night, at the awards ceremony, Chis Stec and I gave a presentation about the history of competition and the ACA.
On Saturday July 4th the most popular race took place, OC-1 men. Many racers battled for the first place position, but in the end Charlie Bracket had the fastest time in the F16 class and Jeff Owen had the fastest F14 time. In addition to the OC-1 men’s race, the OC-2 Women’s race took place. Once again there was a lot of intense racing, but Tammy Kelley and Laurie Stearns wound up winning.

The final day of competition was on July 5th. Although many racers were tired from racing the previous days, there times did not reflect this. In the OC-2 men’s race Zane Havens and Keith Havens won the F14 class while Clayton Cole and Justin Wardwell won the F16 class.

After almost a week of racing everyone was exhausted. The ACA, all the racers, and I personally would like to thank everyone that contributed to the race.

Information about the 2010 WWOCD Championship race and this years race
are available at www.americancanoe.org.