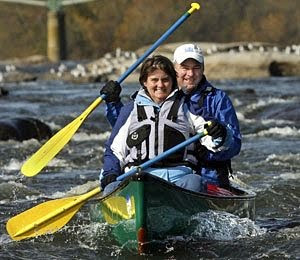 VA Governor Kaine canoes with his wife on the James River.

In a canoe in the James River, Gov. Timothy M. Kaine made an easy paddle stroke and recalled how he landed in Richmond. In the mid-1980s, Kaine and his wife-to-be, decided to settle here to be close to her family. Kaine said he was amazed to see paddlers, anglers and great blue herons.
"I couldn't believe this was in the heart of Richmond. That set the hook pretty deep."
The couple moved to Richmond in 1984 and plan to remain after Kaine leaves office in January.
Kaine and Holton spoke of their attraction to the James and to nature in general during a 3½-mile paddling trip Saturday that included some mild, but cold, white water.
Their party of 16 gathered shortly before 9 a.m. at Riverside Outfitters near Pony Pasture Rapids in South Richmond. The air temperature was about 40, the water temperature about 50.
Notice, the Governor is wearing an
ACA hat!
Read the full article

See you on the river!